Will 2016 be the year Leonardo DiCaprio finally picks up an Oscar? Maybe statistics can tell us.

AS the 88th Academy Awards ceremony draws closer, one question is dominating online chatter. Will this be Leonardo DiCaprio’s year? After all those early morning starts in remote parts of the US at -40 degrees Celsius, not to mention plenty of up-close-and-personal time with a not so cuddly grizzly bear, many believe he’s more than earned his Oscar.

2016 is his fifth year of nomination for acting, having previously been in the running for roles in films including The Aviator, Blood Diamond and The Wolf of Wall Street. This year, it’s his role as a gritty survivalist in Alejandro González Iñárritu’s The Revenant, that’s grabbing all the headlines.

It’s a common belief that success in the Golden Globes, which happen a month before the Oscars, is a good indication of glory at the Academy Awards, even with a completely different panel of judges – the Hollywood Foreign Press Association, versus the Academy of Motion Picture Arts and Sciences.

We dug up data* on the winning male actors from both awards ceremonies dating back to 1951.

We were looking for a connection between Golden Globe and Oscar winners. Not just whether they matched, but what was happening in other categories at the time.

The Golden Globes take into consideration two categories of movie, Drama and Comedy. This means in effect, there are two prizes for best male actor, while the Oscars have just one.

This tells us that actors nominated in the drama category at the Golden Globes are more likely to pick up an Oscar. That’s good news for Leo, and bad news for Matt Damon (who’s also an Oscar nomination for Best Actor), after The Golden Globes somehow decided The Martian was a comedy, not a drama.

But what of the movies themselves? Well, 69% of Academy Best Picture winners were nominated in the Drama category by the Golden Globes (dropping to 50% if you consider actual winners), while only 16% of the Golden Globes’ Best Comedy went on to win an Oscar for Best Picture (a recent example being The Artist, in 2012). 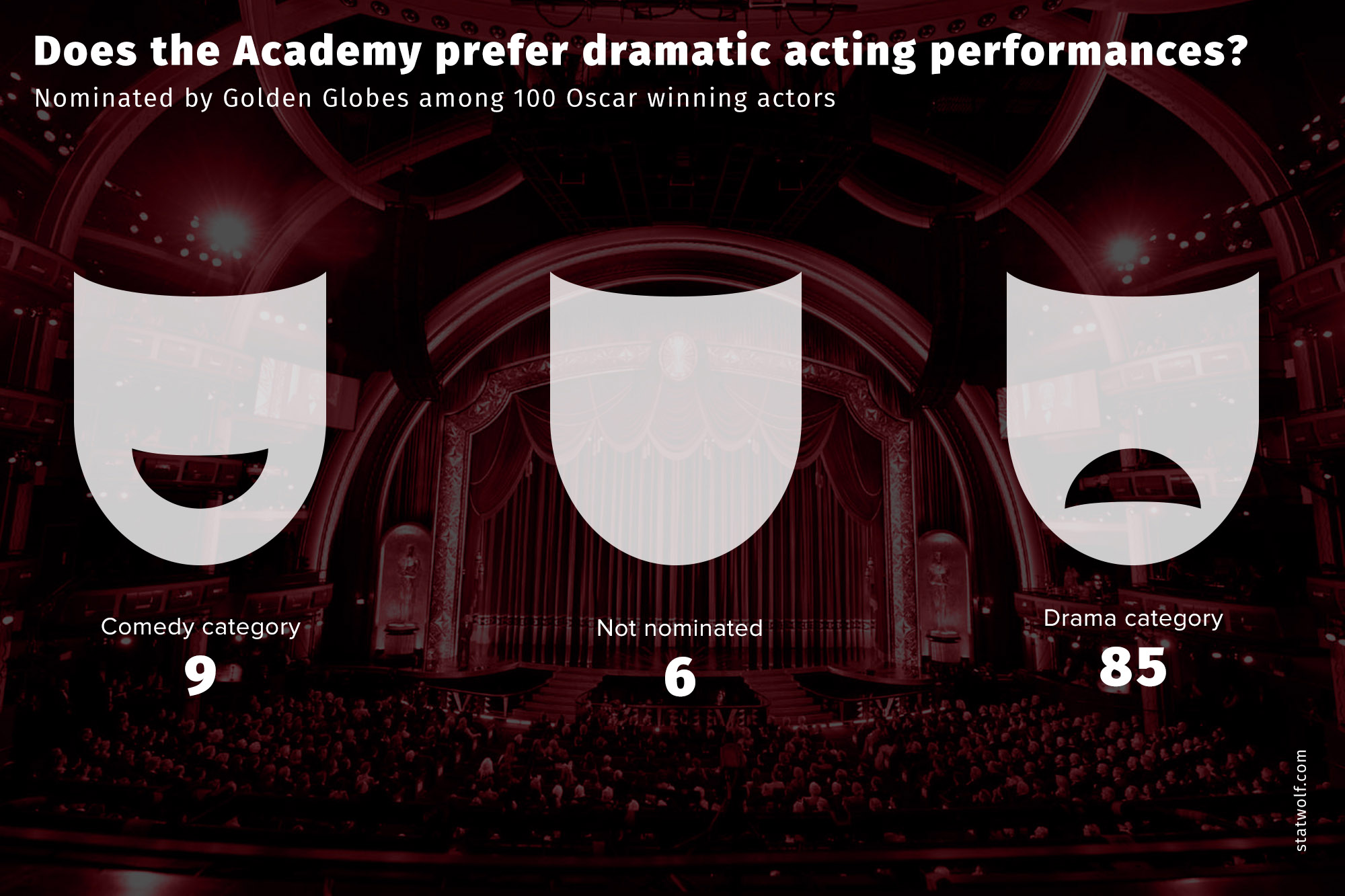 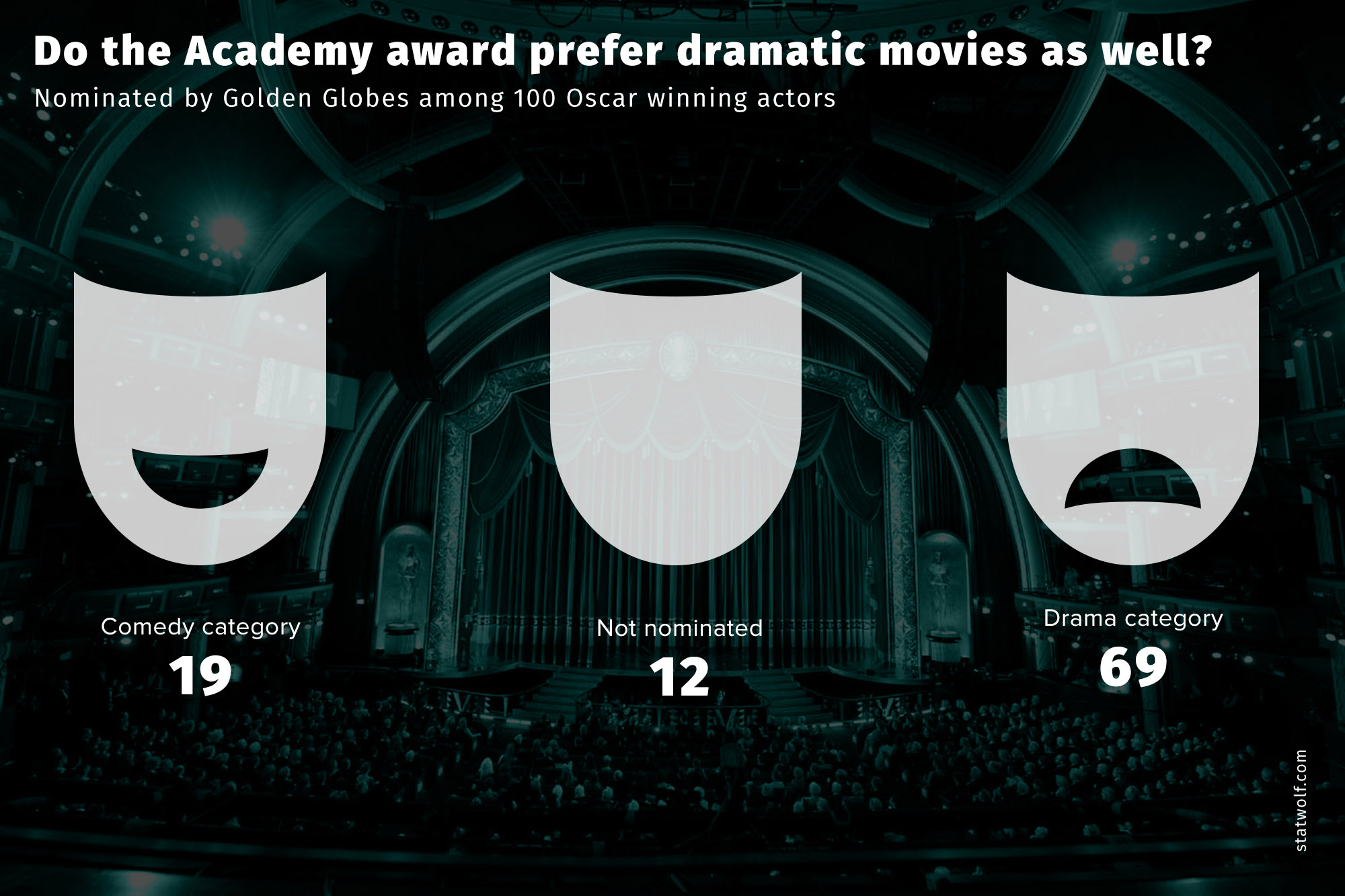 So, data suggests not only does the Academy prefer dramas over comedies, but they rate male performers in dramas more highly.

The Revenant won the Golden Globe for best picture on January 10th, so it’s in with a good chance at the Oscars. But what about Leo’s bid for Best Actor?

Both The Revenant itself, and Leonardo DiCaprio won Golden Globes this year. Since 1951, the combination of a film and its lead actor taking top honours has happened 45 times.

But, only the 42% of these Golden Globe combinations were actually followed up with a Best Actor Oscar. So, even if Golden Globes and Oscar juries mainly agree (64%) about acting performances, the Oscar’s tend to avoid “over-awarding” movies that have already scored a double (both Best Picture and Best Actor).

Finally, we touched on how dramas tend to fare better than comedies at the Oscars, and how this year, Leonardo DiCaprio (in a drama) is up against Matt Damon (in a ‘comedy’). Well, surprisingly, this kind of head to head between Golden Globe category winners for a single Academy prize has only happened 7 times since 1951.

It’s not a big enough number to be statistically viable, but of those 7 times, the drama nominated actor won 3 times (Al Pacino with Scent of Woman, Jack Nicholson with One Flew Over the Cuckoo's Nest, Paul Scofield with A man for all Season), the actor in a comedy role twice (Jean Dujardin with the Artist, beat George Clooney in 2011 and Rex Harrison, beat Peter O’Toole thanks to My Fair Lady), while the other two times were upsets, when both Golden Globe winners in the running were beaten by outsiders; the most famous example being when Daniel Day-Lewis’ performance in My Left Foot, trumped those of Tom Cruise in Born on the Fourth of July, and Morgan Freeman in Driving Miss Daisy.

Of course, that’s just what the statistics say. In reality, every year is different. Data from the past can only give us an idea of what could happen, if we assume nothing else changes, and draws on averages. In more complex scenarios, with larger data sets, we’d use modeling to quantify external forces that also have an influence, helping us predict a more accurate figure. It’s a fascinating field.

Data aside, at the end of the day, in theory, Golden Globe success should have zero bearing on what the Academy decides. But you can be sure they’ll have a list of Globe winners in their minds when they make a call. Good luck Leo, you might need it.