The US presidential race – is the road to victory simply the path of least resistance?

The 2016 U.S. Presidential elections are shaping up to be one of the biggest political battles in recent years. The fact that both candidates are such strong, well-known characters only adds to the excitement – and conflict. On the one hand, we have highly experienced Democratic nominee Hilary Clinton, the first female candidate in U.S. history, former first lady, New York senator and secretary of State. She has the stature, diplomacy and professionalism you’d expect from the leader of one of the world’s great economic powerhouses. The Republicans have Donald Trump.

Trump, despite his social and economic standing, claims to represent the angry masses, tired of the establishment and perceived threat of the outside world, and the things they don’t understand. Being ‘anti’ is a populist rhetoric, loaded with anti-immigration and anti-Islam messages, sexist and pro-fire-arms, Trump is fuelling resentment and gaining support in parts of American society often most affected by the economic crisis.

Put the press headlines and their charismatic performances aside for one moment, and what’s really interesting is the breakdown of support for each candidate – both among voters, and inside their own parties. Let’s look at some data that tells us what kind of race they’ll be making to claim the keys to the White House.

First, the perception of the two candidates among U.S voters. According to a recent poll, Clinton and Trump are negatively viewed by 27% of registered voters; this means that more than 1 elector in 4, feels uncomfortable with either candidate. This data is confirmed by a Washington Post poll comparing “negative popularity” of the 2016 candidates, with those that ran in 2012, Obama and Romney. 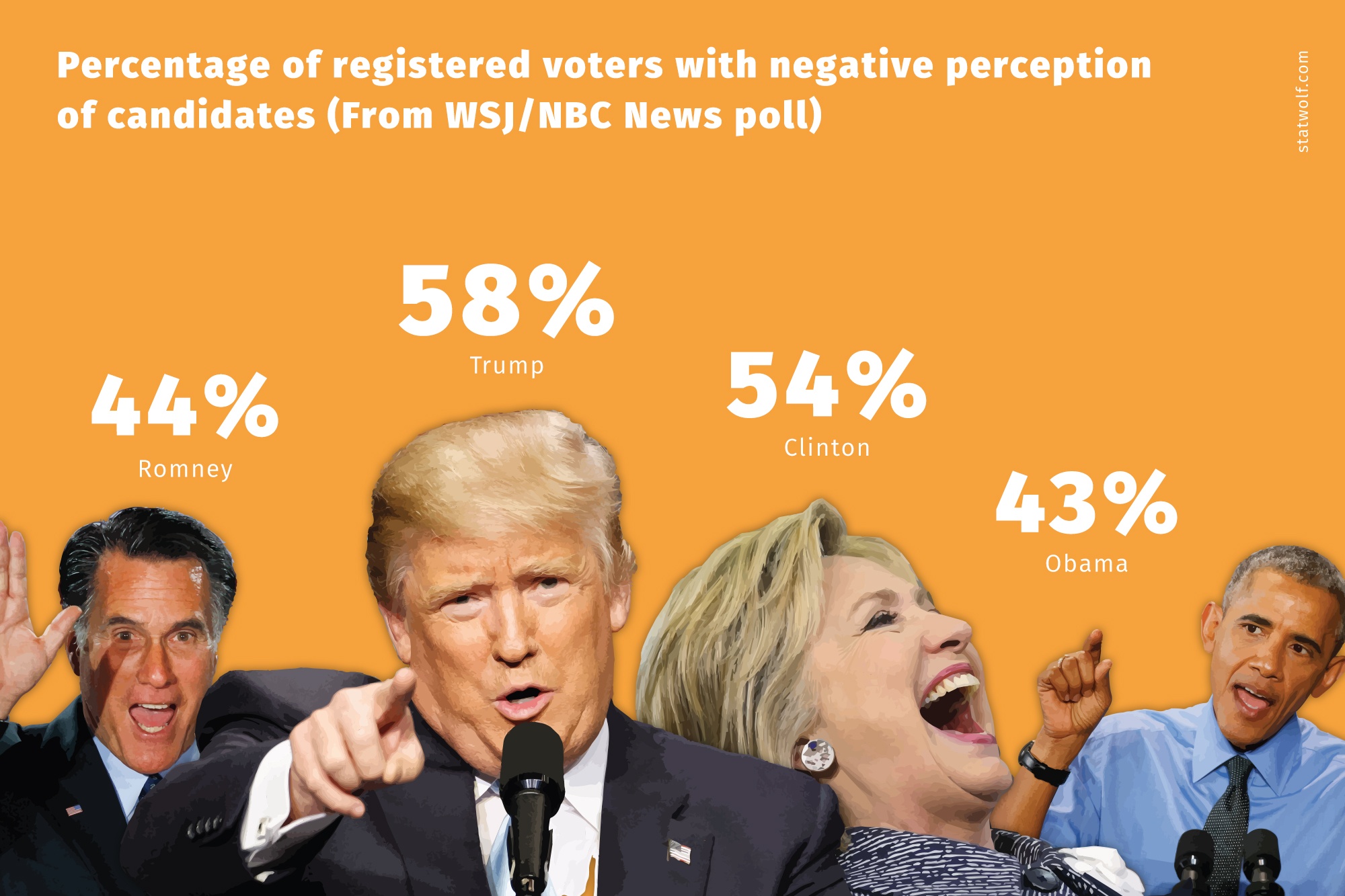 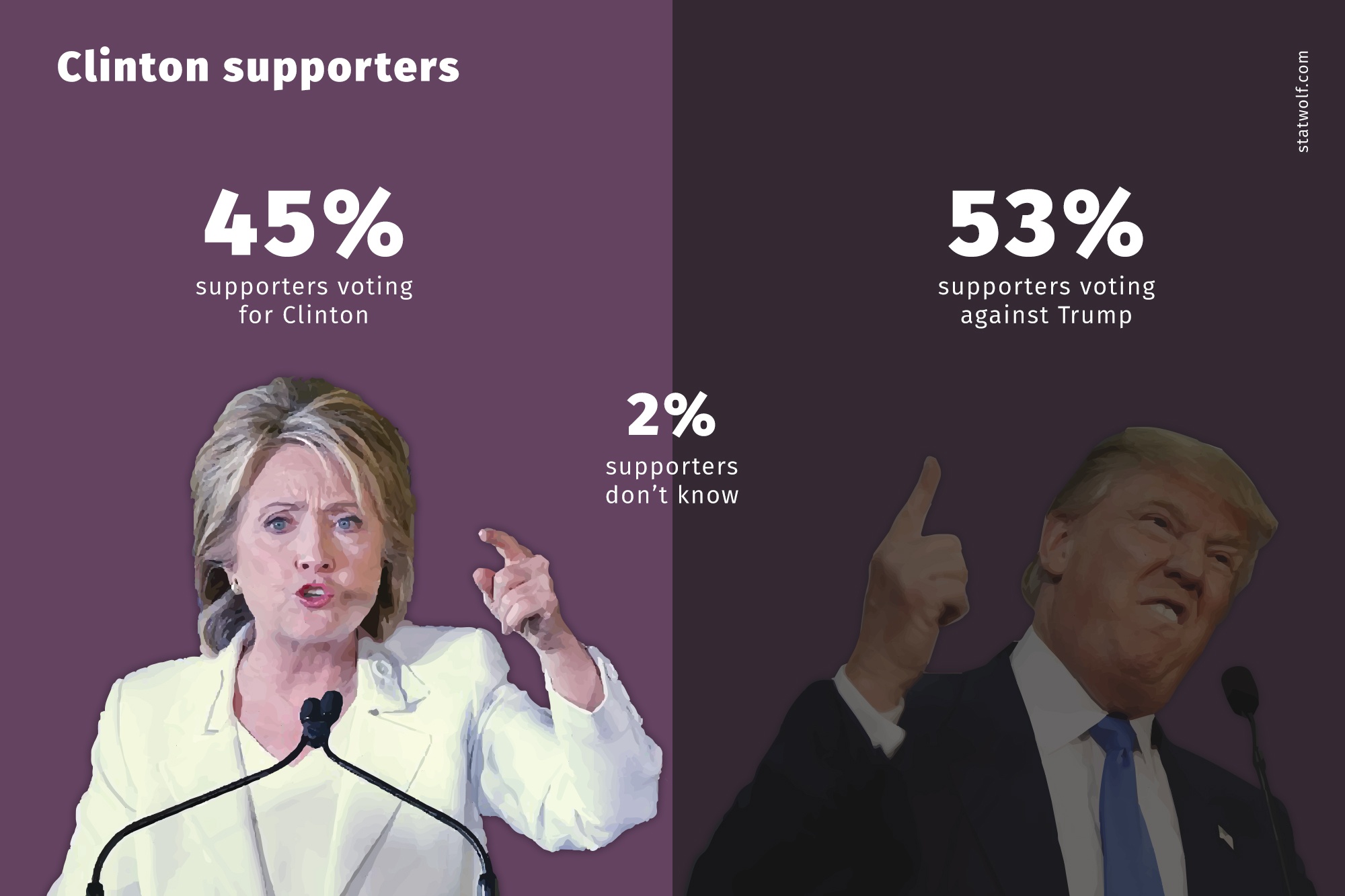 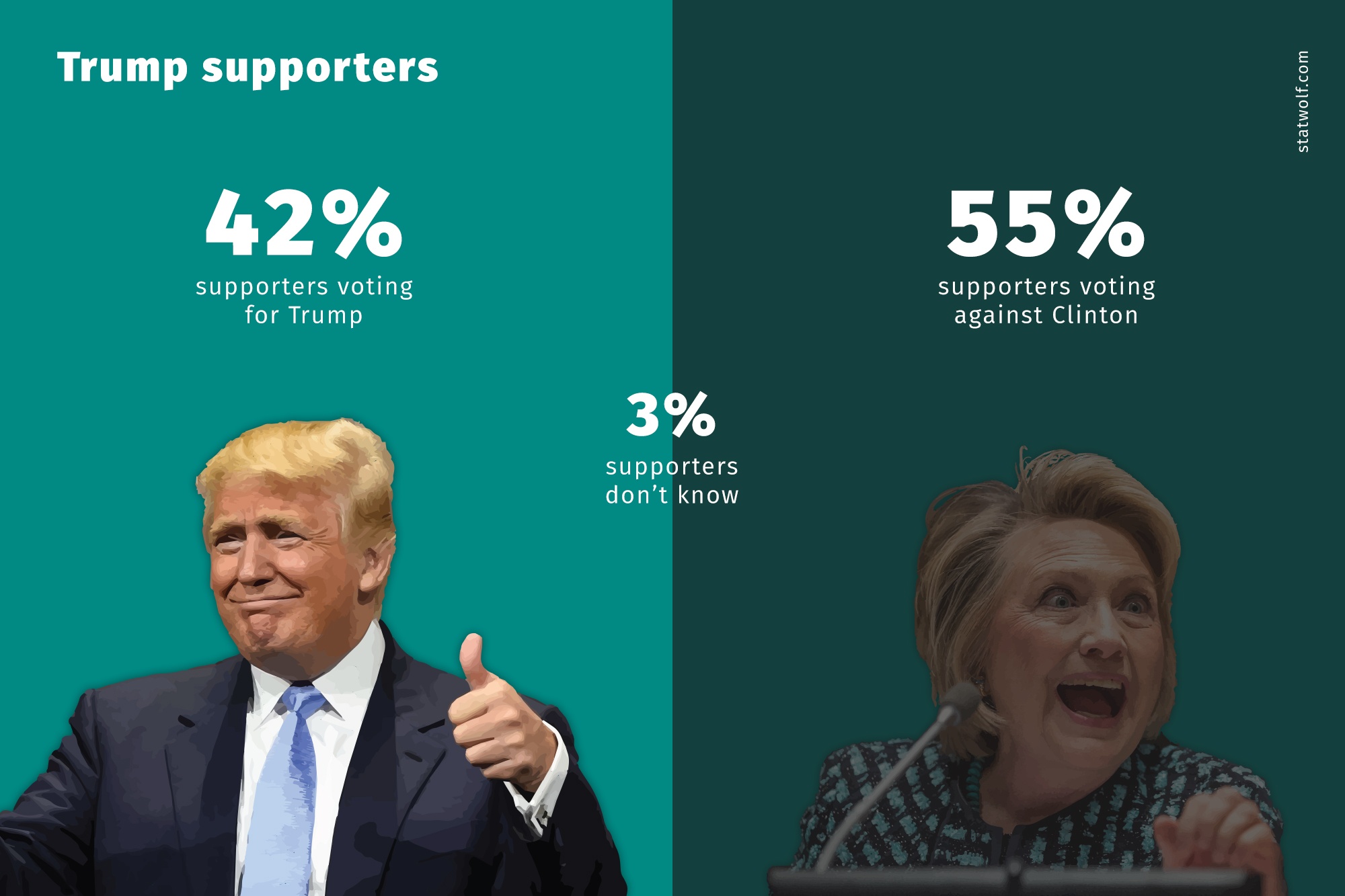 As some analysts have pointed out, there’s no precedent for this kind of negativity towards both candidates in recent times.

Even though neither candidate appears universally popular, there are some interesting patterns in the socio-demographic breakdown of their supporters. 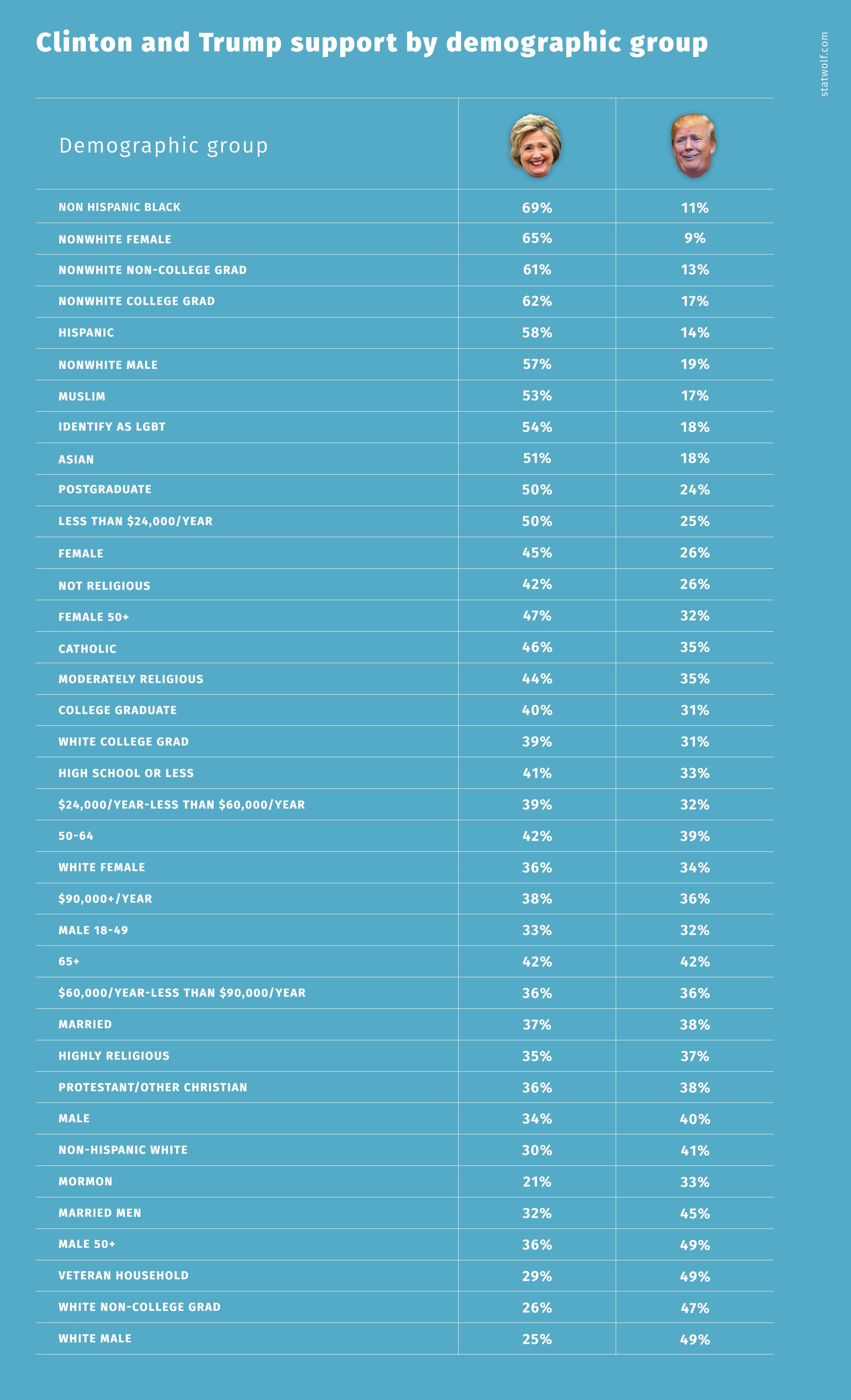 Table 1 shows major support among US voters. It’s striking how strong Hillary Clinton is among ethnic minorities, well-educated and low income people. The competition seems to be more open in categories like middle age citizens, young males, elderly people and the middle classes (defined by income). This suggests the election will be won by the candidate most able to convince voters in these categories. Trump’s heartland appears to be among veterans, poorly educated white men, married man and highly religious citizens.

The Republican nominee seems unable to mobilise female and minority voters, his success dependent on the U.S. periphery, far from the cities and the big centres, in more conservative, religious part of the country.

Just 11% of African Americans polled had a positive view of Trump, compared with 69% who appreciate Clinton. 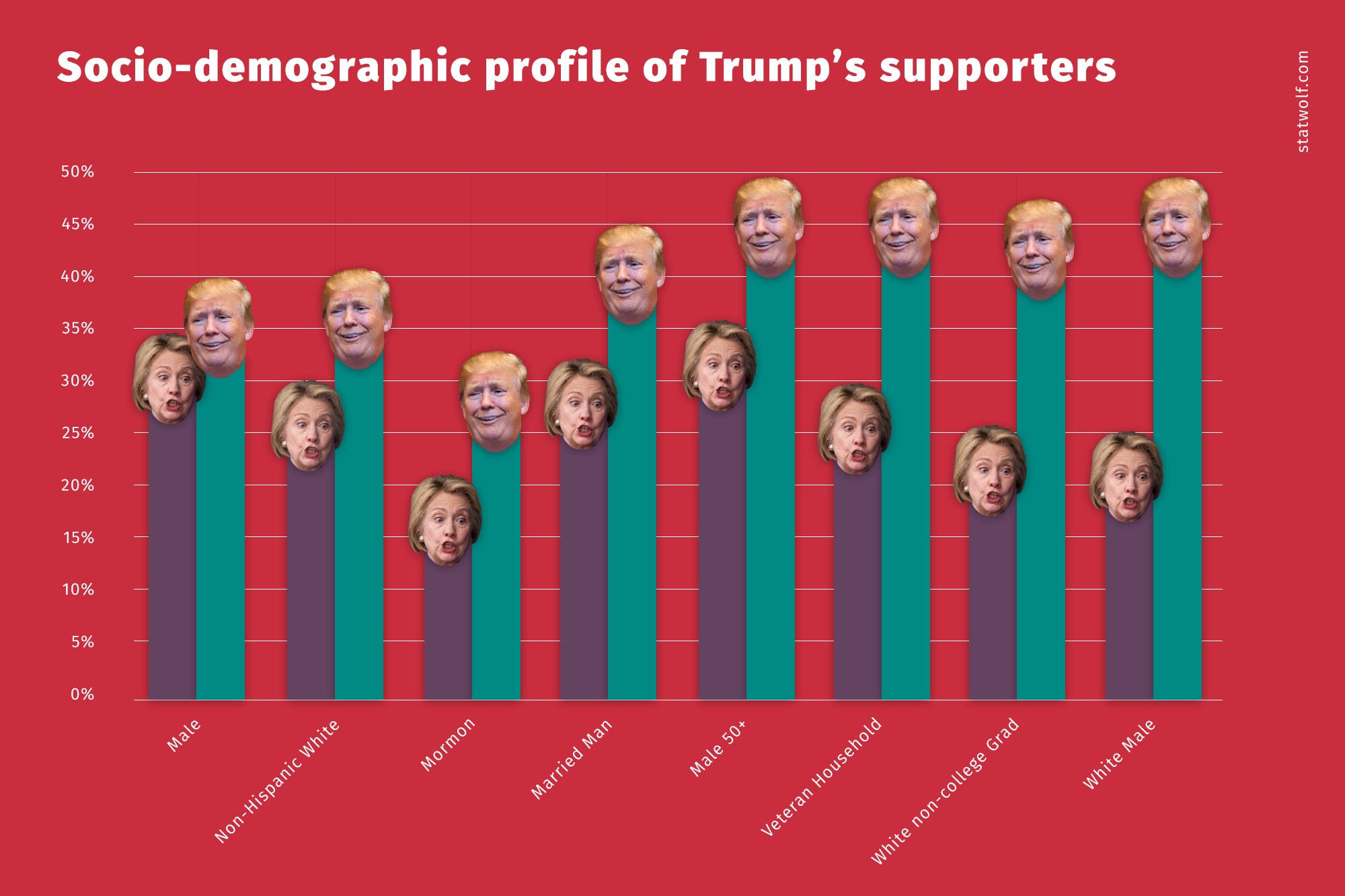 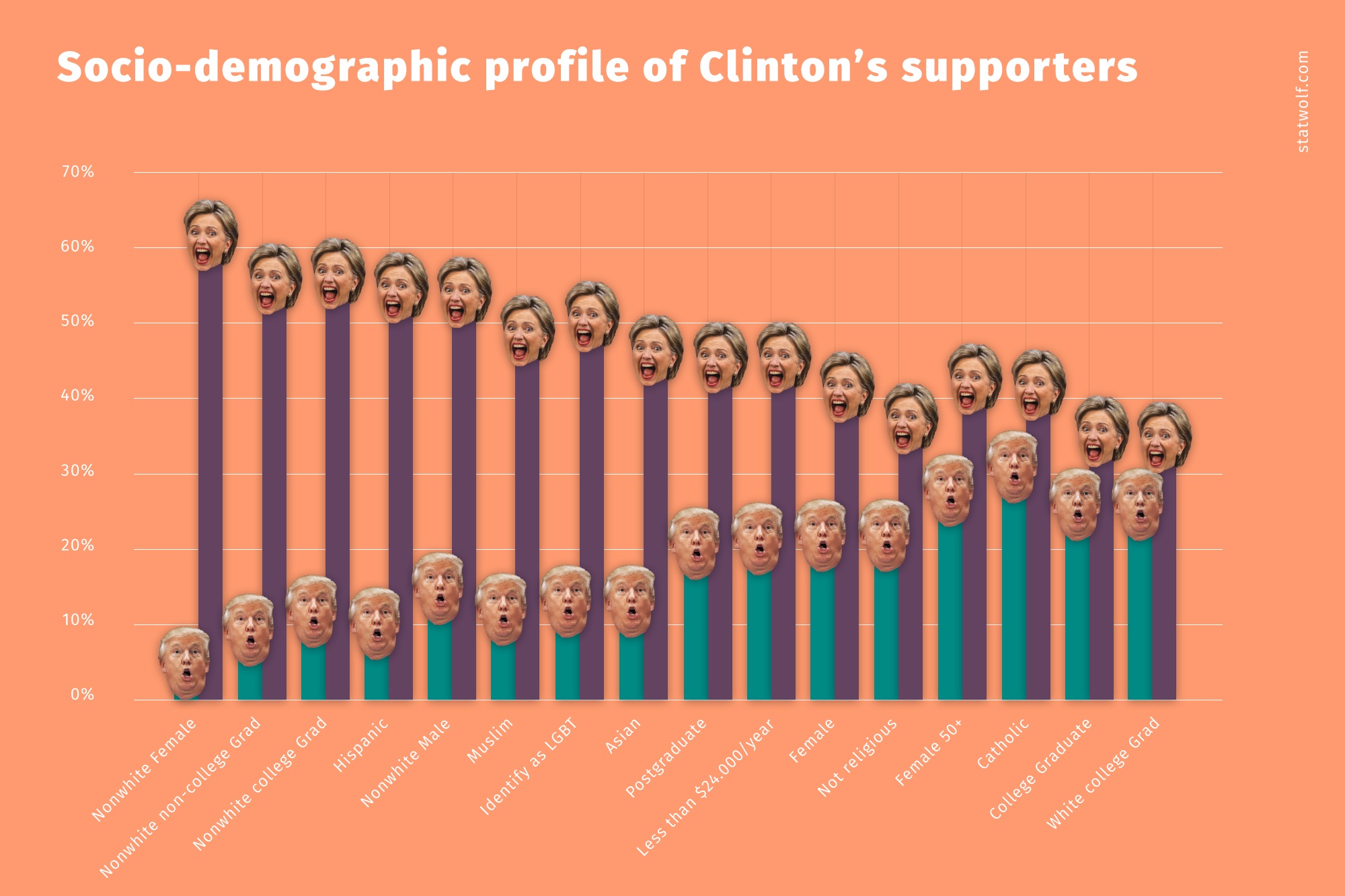 So, who will win the White House?

Now that we have defined the broader framework in which the two competitors are running, it’s interesting to take a look at the polls to make a forecast about who will be the next President of the USA.

The real challenge between Clinton and Trump will take place in the so called swing states, those states in which no candidate or party has an overwhelming support in getting that state's electoral votes. In the 2016 elections, there are 11 swing states that will be crucial in deciding who will be in the Oval Office for the next four years. 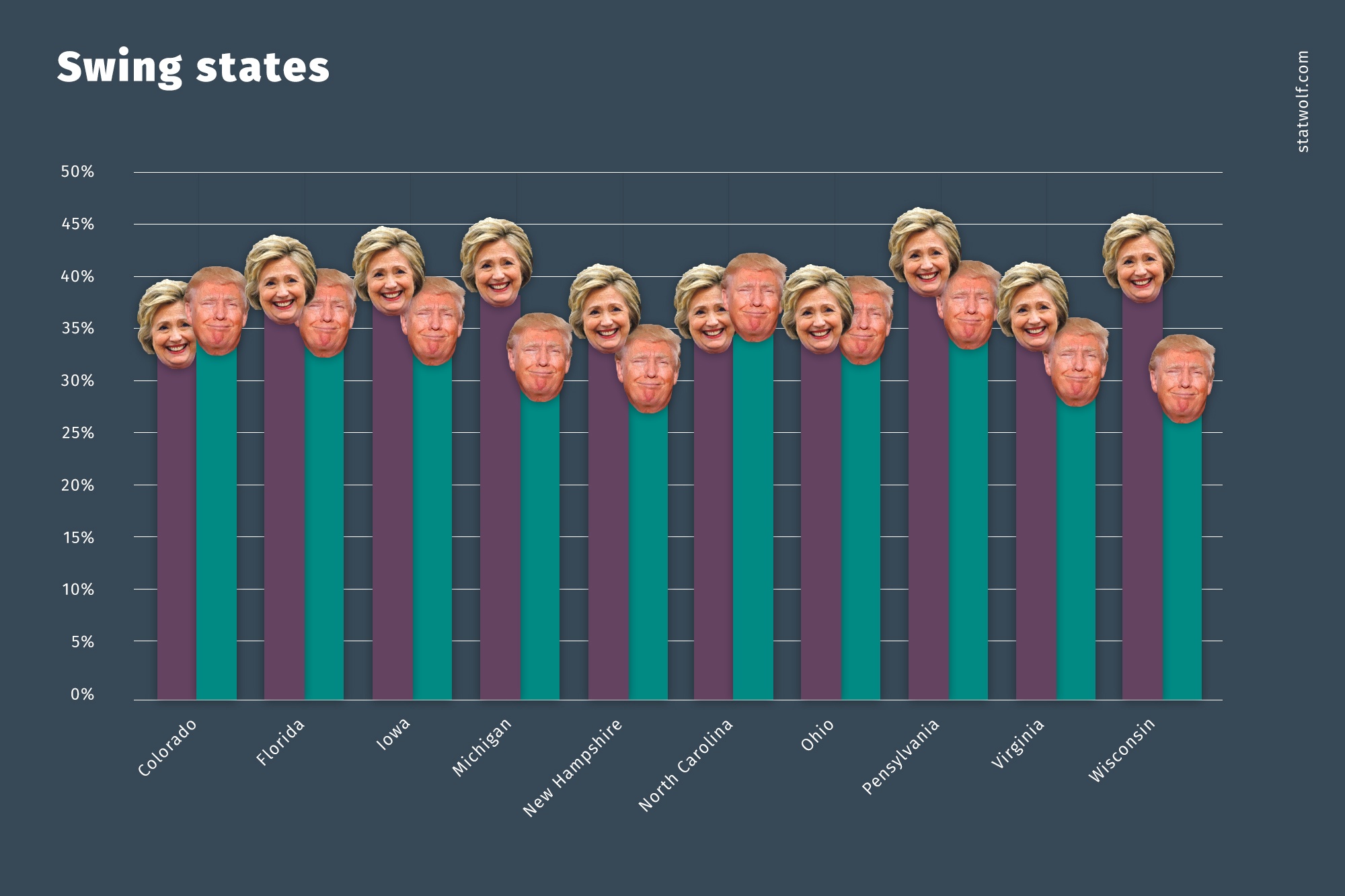 As illustrated, nine out of eleven swing states consider Hillary Clinton as the probable winner, which would secure her the electoral votes needed to gain the Presidency. Looking at the data, we have to underline that Clinton only has a strong advantage in Michigan, New Hampshire and Wisconsin, while in all the other states, the competition seems too close to call.

Looking at the average of the national polls, Clinton is consistently ahead of Trump, but her advantage is thin in the popular vote, which will make it a close race. 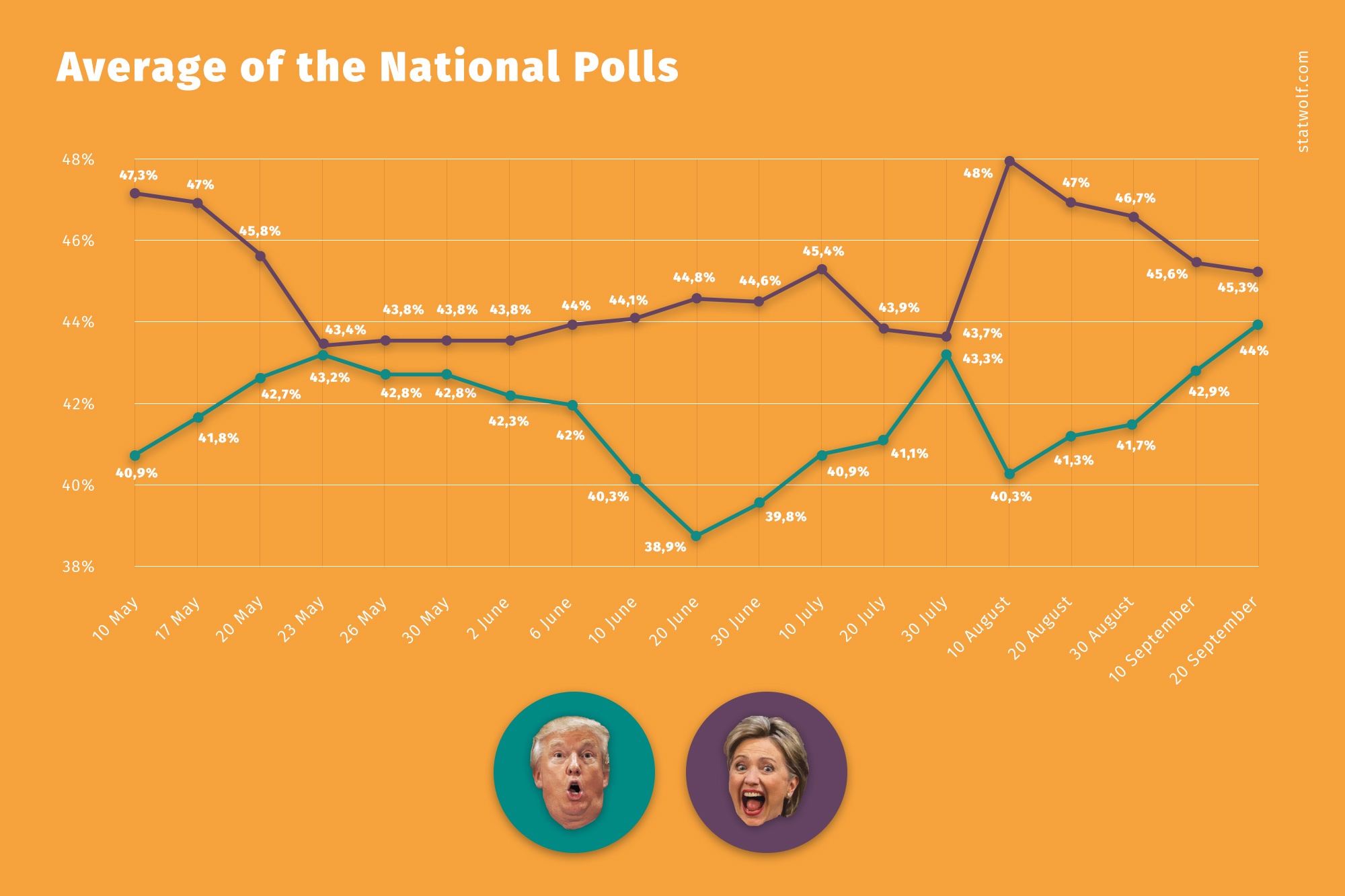 What’s clear from the data is the fact that neither Clinton, or Trump, muster great enthusiasm in electors. Whoever wins, public opinion seems destined to be divided, and in the near future, the state of the States is likely to be anything less than United.

* Eugenio Salvati is Postdoc researcher at the department of Economics and Managment of the University of Pavia and teaching and research assistant at the Department of Political and Social Sciences of the University of Pavia. Eugenio is friendly Advisor at Statwolf for the topics related to social trends. Statwolf, is a leading data intelligence provider, that creates simple data visualisation solutions for businesses, academics and beyond. ** Gallup poll (variables selected by the author)