Is the success of anti-immigration parties in Europe a result of poor social integration? We take a look.

Immigration has always been a hot topic in Europe. But since the Arab Spring in 2011, and the current influx of Syrian refugees making perilous Mediterranean crossings, few subjects have triggered public debate more.

Fear and scaremongering is rife, with tensions fuelled by claims the volume of immigrants will threaten the European way of life, both in terms of cultural values and economic welfare. They’re the backbones anti-immigration parties build their arguments on. But as hostility increases, and emerging Eurosceptic and anti-immigration parties gaining in popularity, are these supposed threats without merit? Or do immigrants really stand little chance of integration?

Let’s take a closer look at the evidence. By analysing socio-economic data on immigrants in EU member states, we can search for a correlation between anti-immigration party hostility, and the successful integration of Third Country Nationals. These figures we use are some of the key indicators identified by the EU as useful for monitoring the results of immigration policies.

For the purpose of this exercise, we’ll consider nine EU member states*, chosen for their length of EU membership and the presence of anti-immigration parties. We’ve also included Hungary, due to recent government actions to deter immigrants, such as the construction of a wall on the Hungarian-Serbian border to keep Syrian refugees from entering the country.

Are anti-immigration parties on the rise?

Looking at the data, one of the first things we spot is the dates of success for anti-immigration parties over the last 20 years. Take a look at tab 1, and you’ll see a large jump in their success at the polls, particularly the UK’s UKIP (UK Independence Party), between 2009 and 2014 and Hungary’s Front National party – even in spite of the Prime Minister’s own FIDESZ party taking a more critical position on the country’s position in the EU. 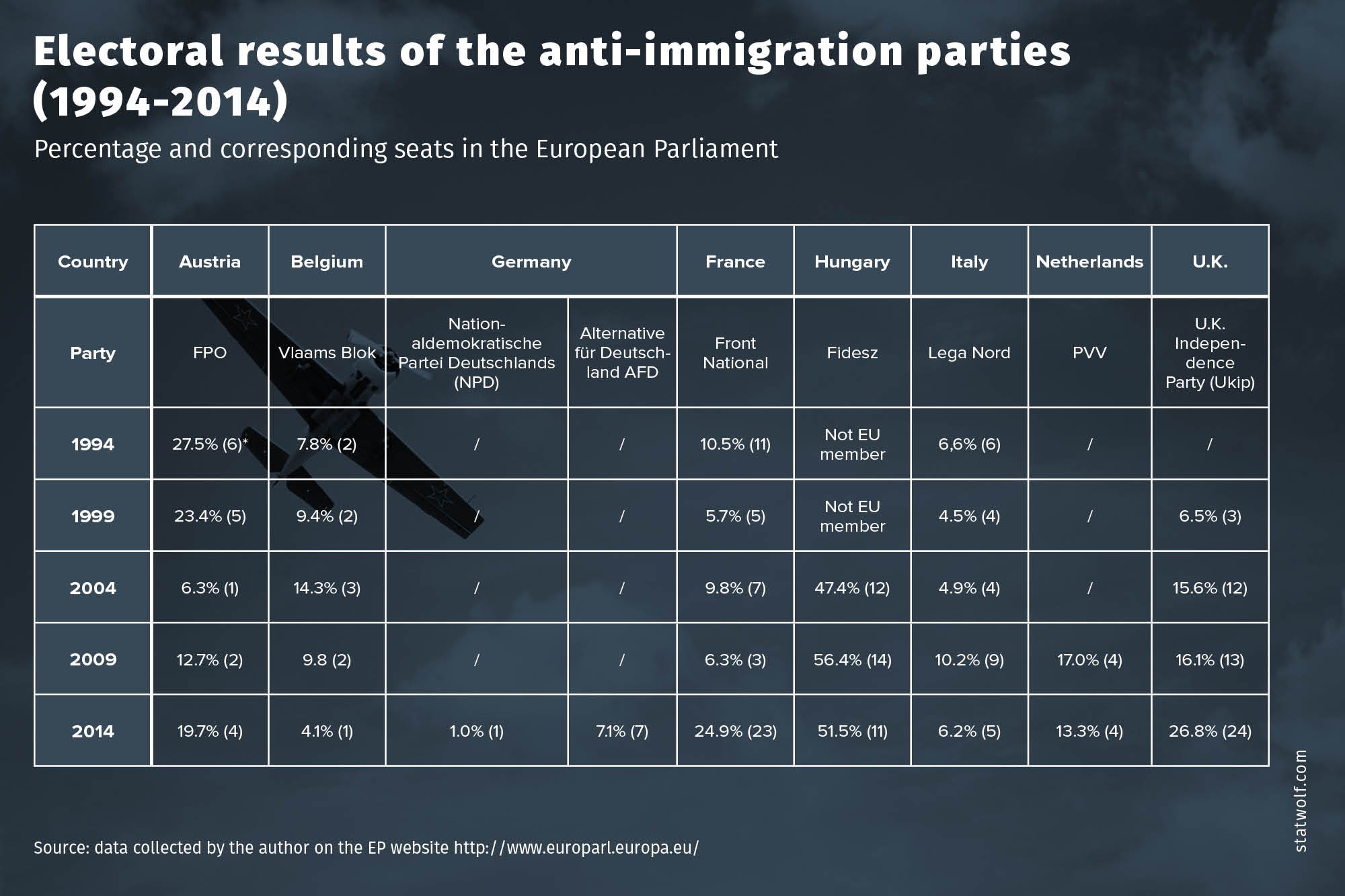 Source: data collected by the author on the EP website http://www.europarl.europa.eu/

The UK and Hungary aside however, the data doesn’t show a clear picture of steady increase. This is most likely because the situation changes all the time, and anti-immigration parties need a trigger event to boost success at the polls.

Take a look at Fig 1, which shows the results of the 2014 European Parliament elections and seat gained by anti-immigration parties. Right Wing parties did well in France (Front National) and the UK (UKIP), two of the leading countries of the Union. They’re also the countries with the most relevant colonial past, which has helped shape two different models of integration for foreigners: the assimilation for French and the cultural pluralism for the UK. Both models have highlighted some of the problems of integration for second and third generation immigrants. 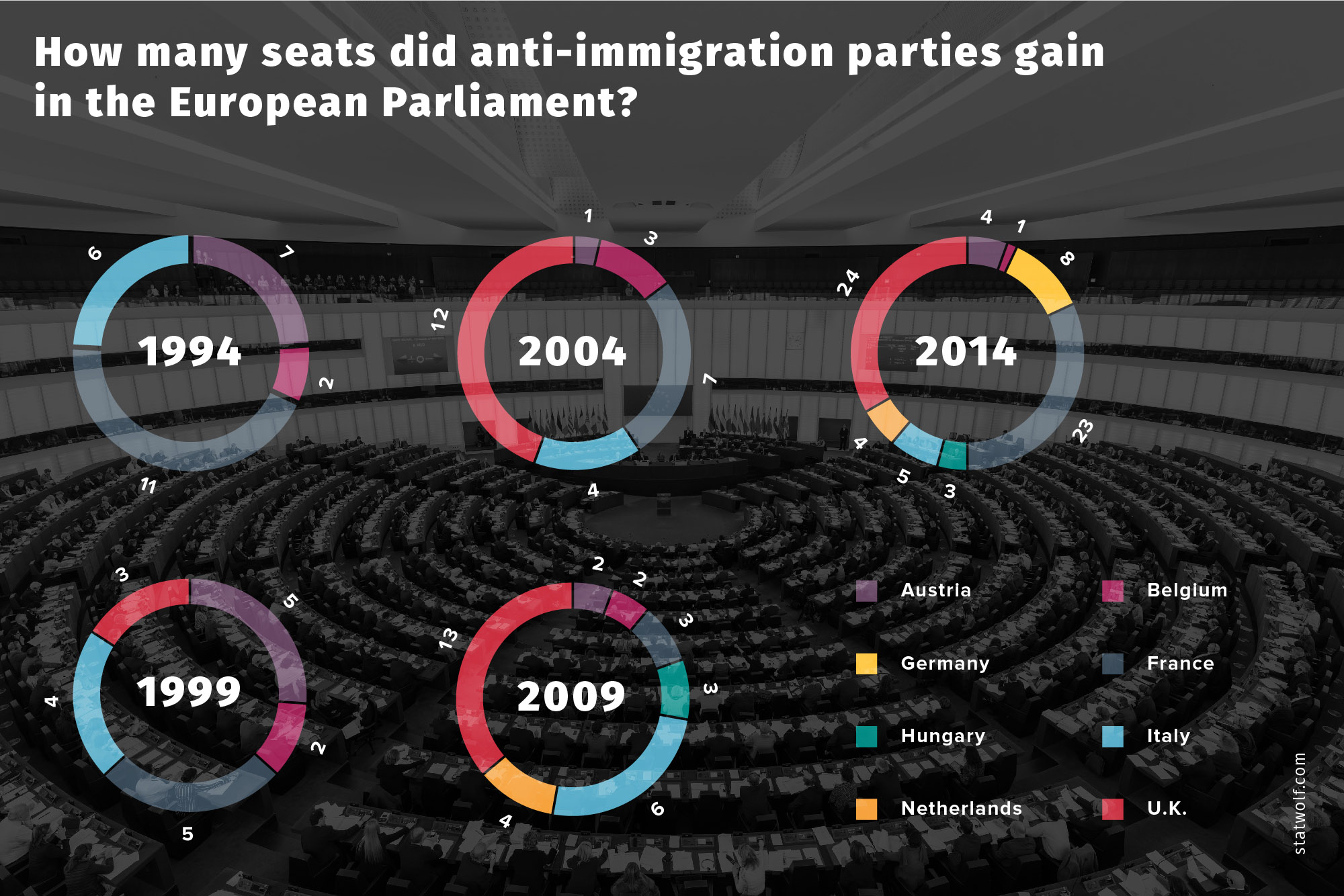 So it seems anti-immigration parties are beginning to enjoy greater success in elections, but is it a reflection of a crisis in Europe? And what is the real impact of immigration?

What’s the social impact of immigration?

Let’s take a look at the social impact. Is there really a legion of socially excluded and unemployed people contributing to EU countries being our less safe than before?

We can start to answer this question by looking at immigration numbers (how many immigrants live in EU member states), their social inclusion – which means being actively involved in the host country as a key feature of immigrant integration - and integration in the local labour market.

To provide a valuable answer to our questions, we studied some social indicators concerning third country nationals (TCNs) living in EU member states, starting with how many live in the countries recording the greatest success of anti-immigration parties.

The average resident EU population of TCNs is 4%. The country with the most TCNs is Austria, at 6.9%, followed by Germany (5.7%) and Italy (5.2%). So it might be considered strange that the UK (3.9%) and Hungary (0.6%) saw anti-immigration parties achieve such success when their resident TCNs are actually below the average.

So let’s look at social inclusion, which could be a stronger indicator of integration issues. The picture provided by poverty rate data shows that with the exception of Belgium and France, all the countries we’re looking at have a poverty rate for TCNs under the EU average (fig.2). This is also reflected in the health status of TCNs (fig.3). That indicates that in Belgium and France, two basic indicators of social inclusion are well below the rest of EU countries in our study. 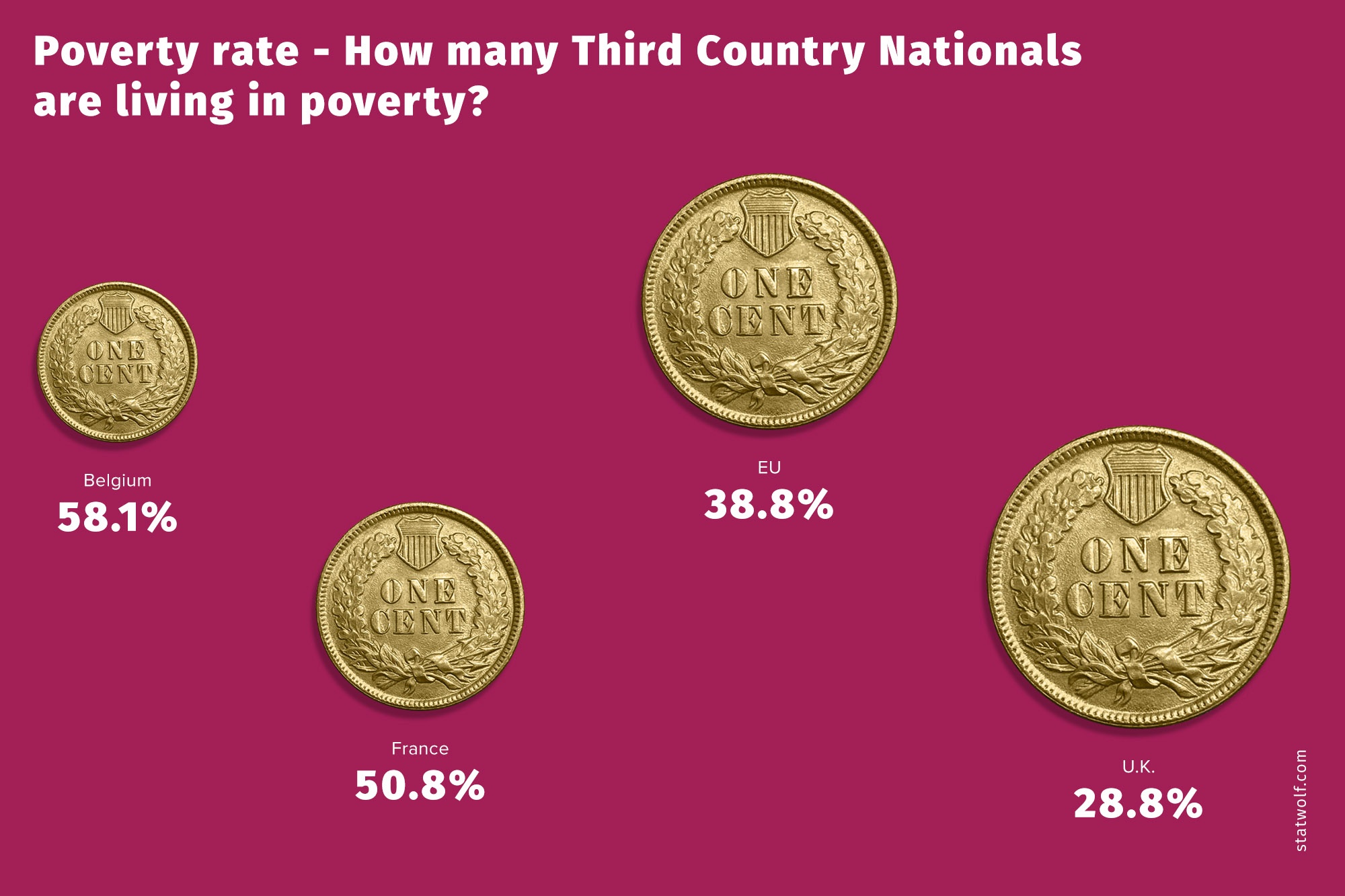 How the UK dispels some myths

So what about the UK? It’s interesting to note that the UK had optimum standards in these two indicators, suggesting more successful integration.

To confirm the idea that the UK’s integration system performs better than the others, another indicator can be examined; how many people consider themselves discriminated against on the grounds of ethnicity, race, or citizenship?

Percentages indicate the UK as the most virtuous country among our sample, abundantly under the EU average. The most striking result is the one from Austria, with more than double the EU average (46.5% against 22.6%) considering themselves discriminated against. 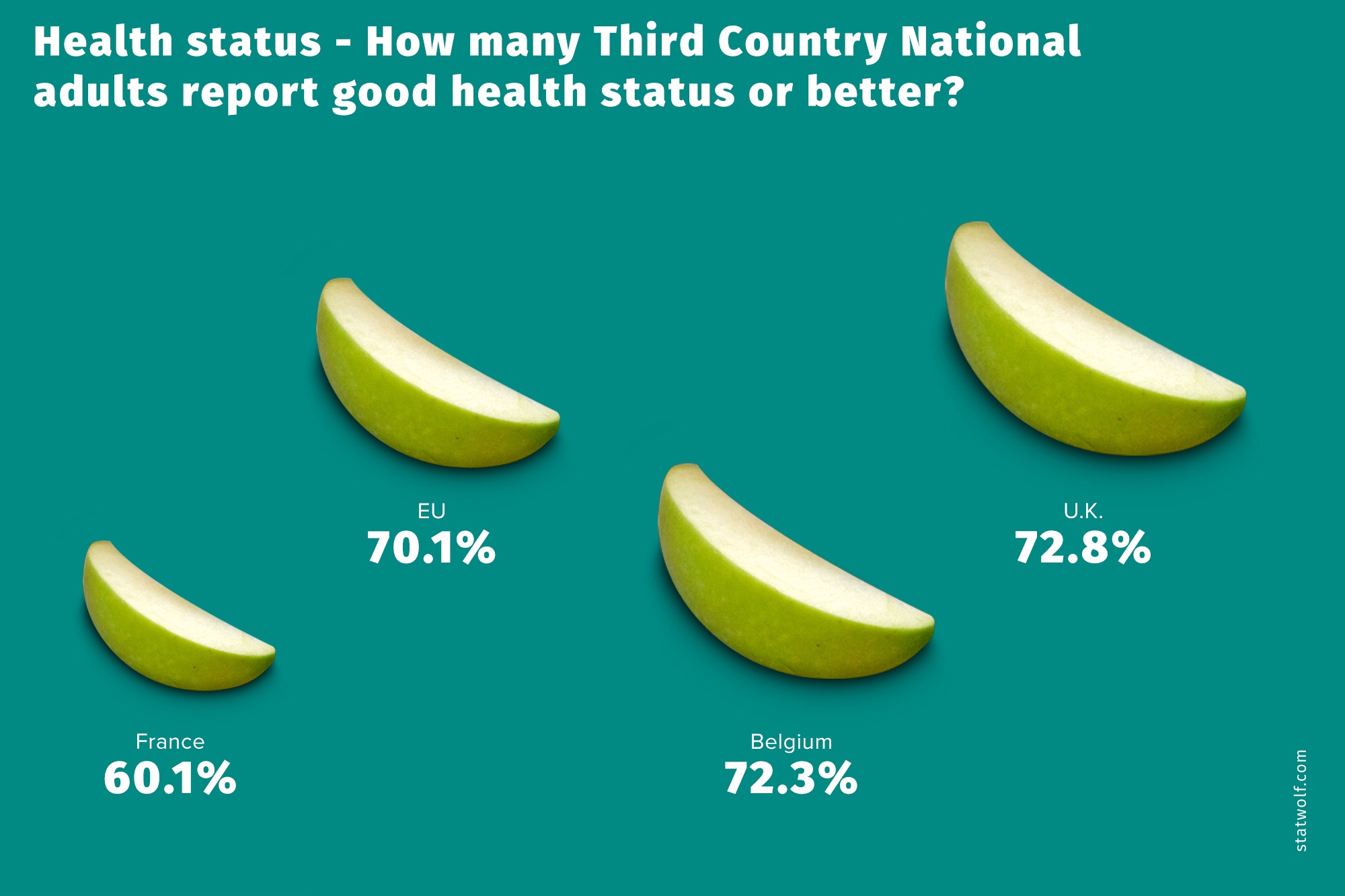 So how can we explain the success of anti-immigration parties in the UK, when integration doesn’t appear to be a problem? The data concerning education and the labour market could shed some light.

From our study list, UK is among the countries with the least number of TCNs with low education levels (fig. 4), and the highest rate of well educated TCNs.This means that these two countries are able to attract and select a highly skilled immigrant labour force. This presents high opportunities for immigration employment, easing integration. Yet, this in turn might make it seem harder for non-immigrant citizens of low education to compete for these jobs, which could cause resentment. 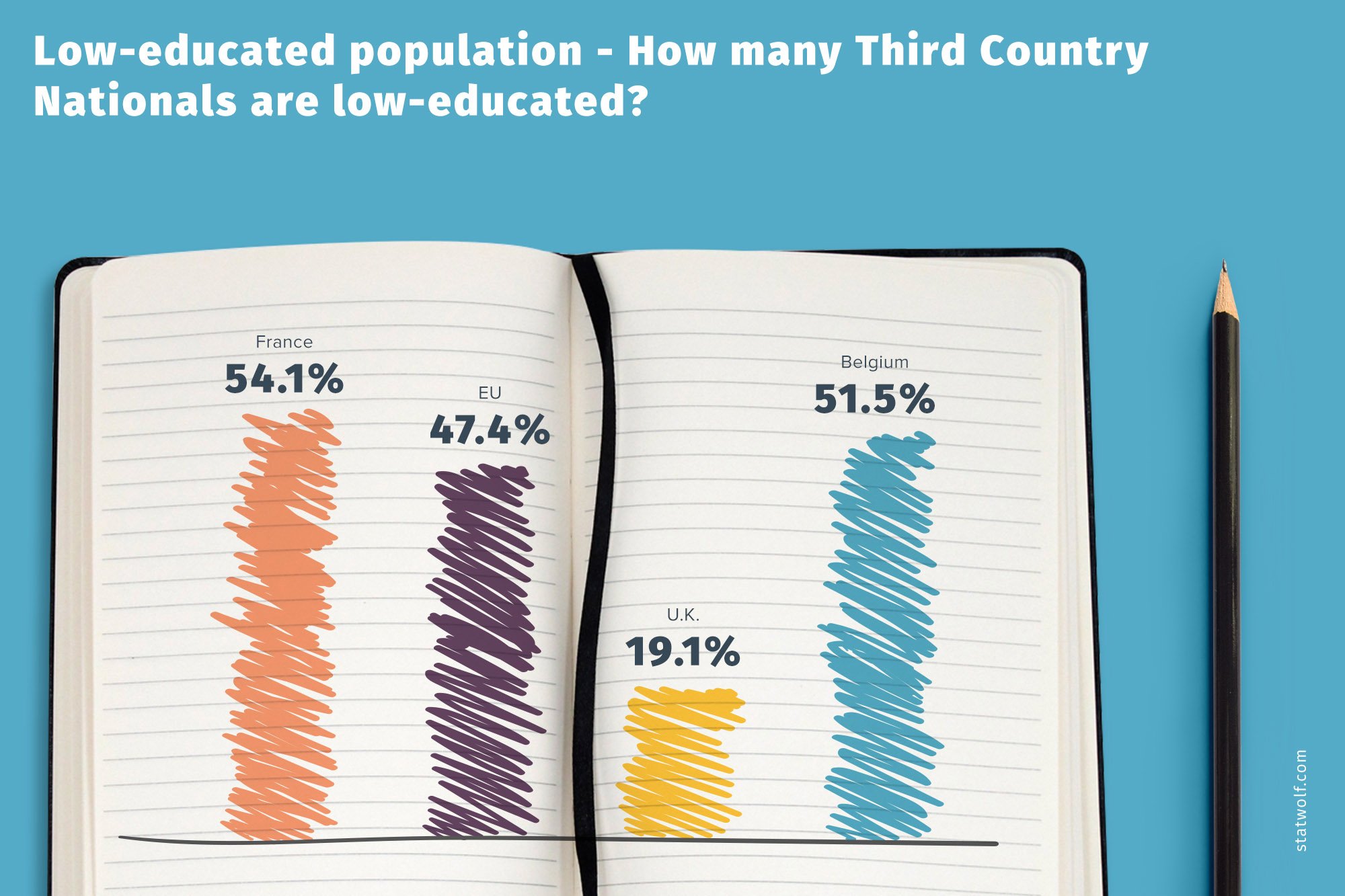 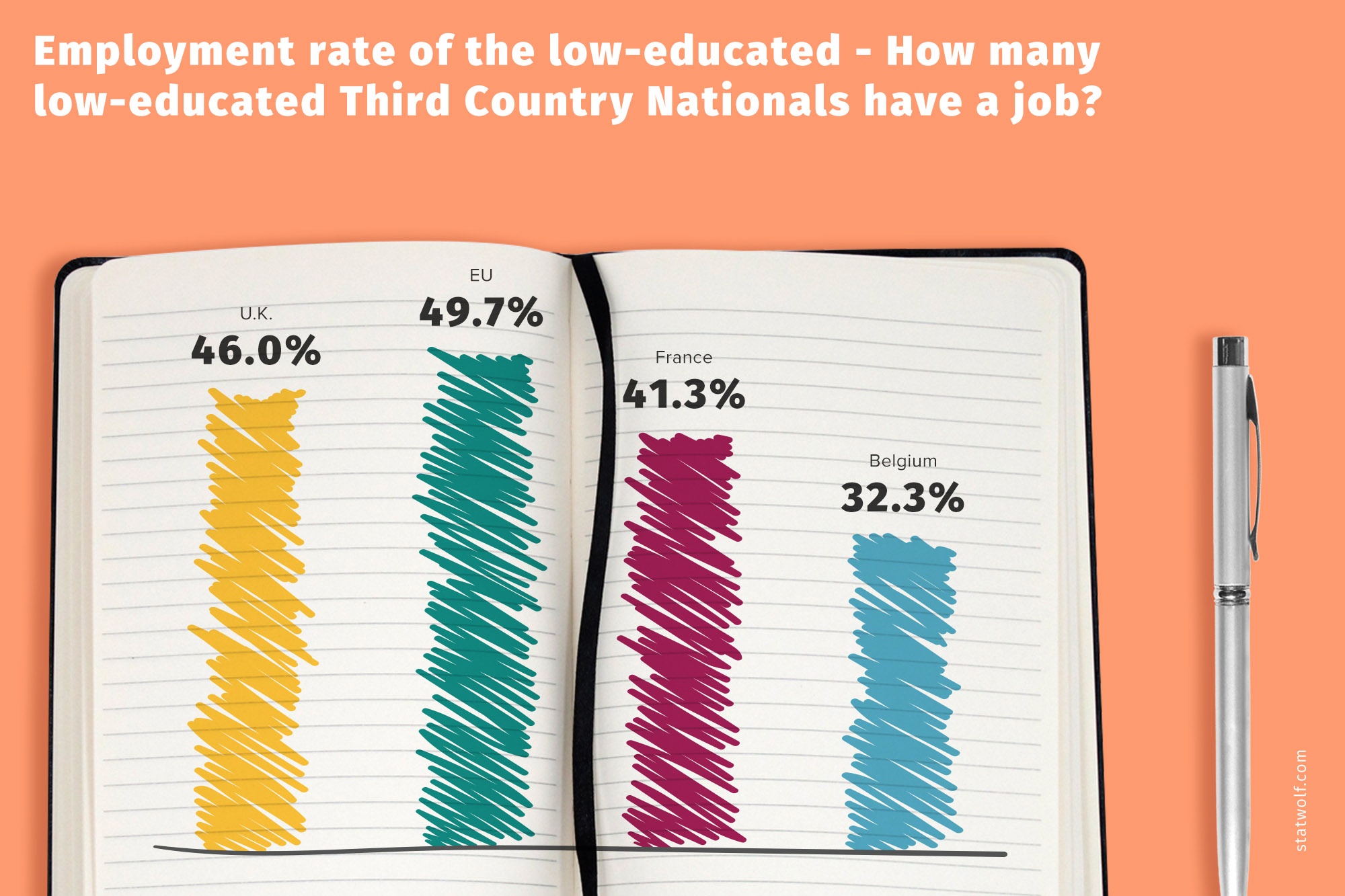 The problems in France and Belgium.

The economic situation in France and Belgium results in difficulties for low educated TCNs finding work (fig. 5), which in turn can lead to poor integration, offering convenient “political fuel” for anti-immigration parties.

However, in the UK, the more positive employment rate for TCNs, makes it hard for us to conclude there’s a direct relationship between economic and labour data, and a growth in social tension reflected by the success of an anti-immigration parties.

So what can the data tell us?

Well, frustratingly, with the exception of France, the analysis of this data shows, it’s quite difficult to establish a direct relationship between integration and the electoral results of anti-immigration and Eurosceptic countries.

Their success can more likely be attributed to general trends in EU countries, like the economic crisis and the weakness of the welfare state stoking the fears of European citizens.

The data does however, offer insights into actual conditions of integration in Europe, underlining some strengths and weaknesses in immigration policies of different members. Such differences in data emphasizes the need for a common EU immigration coordination policy.

In fact what seems to be evident from the social and labour market data, is the difficulty countries like France and Belgium are having establishing a sufficient level of socio–economic integration for third country nationals. It’s a sad, but interesting fact that poor integration makes immigrants more susceptible to radicalisation, which appears to be what happened in the run up to the terrorist attacks in Paris, and masterminded in Belgium, events which are now being used to drive the political narrative of anti-immigration parties like France’s Marine Le Pen.

* Eugenio Salvati is Postdoc researcher at the department of Economics and Managment of the University of Pavia and teaching and research assistant at the Department of Political and Social Sciences of the University of Pavia. Eugenio is friendly Advisor at Statwolf for the topics related to social trends. Statwolf, is a leading data intelligence provider, that creates simple data visualisation solutions for businesses, academics and beyond.