Great Britain voting on a Brexit. Did data see it coming?

The new deal struck by British Prime Minister David Cameron in Europe on February 20th may have secured ‘special status’ and exemption from being drawn into an ‘even closer union’ (the institutional process which leads to major integration), but will it be enough to avoid a Brexit (Britain’s exit from the European Union entirely)?

With the country set to go to the polls in a one-off referendum on June 23rd, we wondered, could data have seen the growing negativity towards EU membership by UK citizens?

It’s fair to say relations between the UK and Europe haven’t always been rosy. But as the referendum is a public vote, on the day, it’s the opinions of the people that count. So how have feelings towards the EU changed over the years?

Let’s take a look at data from the Eurobarometer statistical survey from the last 15 years.

Our first insight comes from the degree of attachment expressed by UK citizens to the EU, compared [1].

In the considered period it has always been negative, with a range of between 48% to 65% of the UK population declaring they feel not very attached, or not at all attached, to the EU. This data is particularly relevant if we take a look at what other European countries citizens said. Only 33% to 52% expressed a negative feeling towards Europe. In fact, in the above chart, UK citizens consistently felt 10-20% more negative towards the EU than European citizens have.

These negative feelings towards the EU may not be all bad though, they partly stem from a love of the UK, as much as any negativity towards Europe.

As we can appreciate above, there is a strong attachment of UK citizens to their country, and this feeling represents a huge obstacle towards strong identification with the EU.

This is contrasted by a 2006 survey (see the following figure), where EU citizens were asked if they ever considered themselves Europeans, rather than purely nationals of their country.

It’s quite a striking comparison. 56% of other European citizens claimed they often felt ‘European’, while only 33% of UK citizens expressed the sentiment, showing a much weaker connection to Europe in the UK.

Another element that confirms the negative feelings of UK towards EU, is the data concerning trust in the European Parliament. The total negativity from respondents suggests two thirds of UK citizens don’t have faith in the only directed elected institutions of the EU. This scepticism is a good representation of Britain’s distrust in European institutions and in the way they are working.

These feelings, perceptions and negative considerations against EU could be defined as clear hostility. If we look at the data concerning the question: “If you were told tomorrow that the European Union had been scrapped, would you be sorry, indifferent or very relieved?”. The answers reveal an overwhelming majority of UK citizens (74%) would be happy or indifferent about the end of the EU.

The general support for a scrapping of the EU is not simply an expression of the UK’s bad feelings towards EU integration, but also comes from rational evaluation made by British citizens concerning the economic and political benefits of membership. According to the data, a striking majority of those questioned, believe there is nothing to be gained by the UK staying in the EU.

So, what will the UK decide?

Whatever the outcome on June 23rd, it will be the conclusion of a difficult relationship, a turning point in this tormented marriage… and with UK polls showing the population strongly divided, should the UK decide to remain an EU member, it’s likely there will always be some degree of hostility.

The agreement signed by Cameron with the EU is a great political success, because it will guarantee the UK a great economic advantage, but according to the polls, it’s hard to tell if it will be enough to keep the UK in the Union.

First of all, the Eurobarometer survey (see below) tells us less than a third of UK citizens believe EU membership is a good thing. While the last figure, polls (dated February 29th) reveal the “stay” position is around 37%, the “leave” is at 38% while the uncertain represent a 25% of the total. The high rate of uncertain electors represent great room for both sides to educate, and mobilise the electorate. 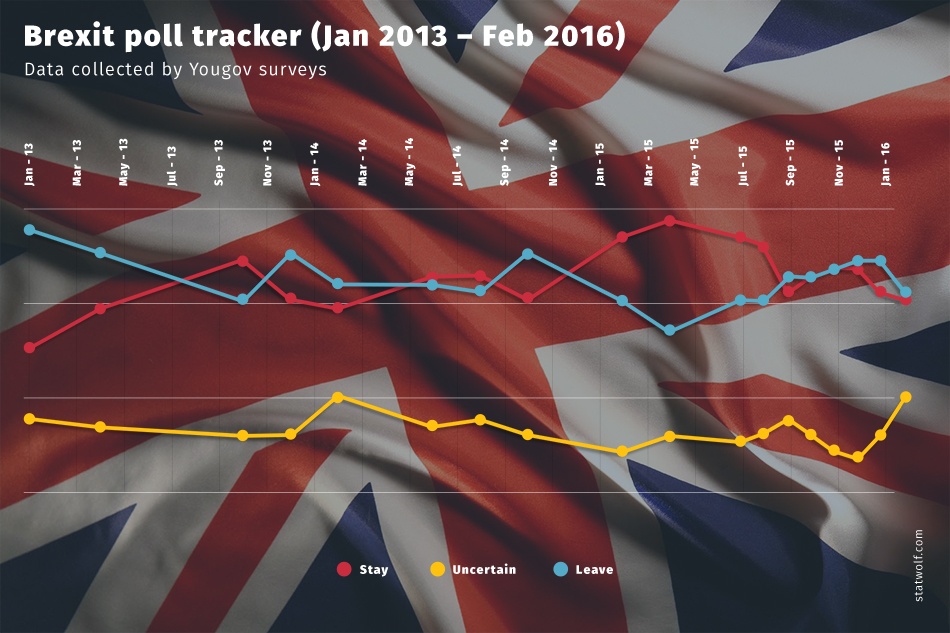 This makes forecasting a result incredibly difficult. Especially with such strong influential figures supporting either side.

An eventual UK exit from the EU could represent a “big bang” for the fragile economic and political situation of Europe, possibly putting a stop to the weak economic recovery of the Eurozone, and a loss of credibility for a Union that would lose one of its most important members. But even for the UK there will be problems with a EU exit. The UK would no longer be a part of one of the richest economic areas in the world, and will lose the advantage of free trade.

Inward investment may slow in the medium and long term, due to uncertainty of the consequences of a Brexit. In particular there could be some repercussions for London as one of the biggest financial centres, due to the fact that it will no longer be seen as a gateway to the EU for the likes of US banks. According to policy experts, a British exit would diminish, rather than enhance, the country’s standing in foreign affairs, reducing its influence.

As with any great unknown, the damage a Brexit could create are much more evident than the benefits. It’s something the British Prime Minister is acutely aware of. But will it be something voters in the UK only come to realise when it is too late?

[1] For 2000 and 2004 the EU average data are not available. * Eugenio Salvati is Postdoc researcher at the department of Economics and Managment of the University of Pavia and teaching and research assistant at the Department of Political and Social Sciences of the University of Pavia. Eugenio is friendly Advisor at Statwolf for the topics related to social trends. Statwolf, is a leading data intelligence provider, that creates simple data visualisation solutions for businesses, academics and beyond.