In the world of product packaging, trends come and go. But few have swung as wildly back and forth as the demand for bottled beer versus canned beer.

In Europe, there’s a general belief that beer sold in cans is inferior. Not just poorer quality, but that the container makes them less aromatic. This is largely due to the fact the lightness of the cans makes them more cost effective to transport, making them historically popular for cheaper brands. Even today, there’s a perception that beer sold in cans is made by mass manufacturers, while beer in glass bottles is made by smaller craft breweries.

In the US, however, this didn’t stop cans overtaking bottles in 1969 [1] to be the most popular packaging to sell beer in. Cans have come a long way since they were patented in 1810. Traditional steel cans were too heavy to carry drinks, and were hard to open. It’s only when aluminium cans were launched in 1958, and ring pulls were invented in 1962, that they became a viable option.

Check the data and you’ll see that cans have been the most popular form of beer packaging in the US since 1981. The peak of this gap was in 1991, when 60% of the beer market was dominated by aluminium cans, while just the 24% of US beer was sold in glass bottles.

Since then, bottles have regained ground as smaller breweries have risen in popularity. To give the impression of premium quality, and a competitive edge, many felt they had to use glass bottles. As a result, in 2004 there was a difference of just the 6%.

Despite the perceived prestige, even aside from cost and weight, glass bottles actually have many disadvantages over cans. Environment­wise, glass needs about 1 million years to completely break down, while aluminium only takes 80 – 100 years, which hardly makes them the environmentally friendly choice.

Cans also protect beer from sunlight, which impairs the taste and quality of beer over time. Beer exposed to sunlight can develop a bittering agent called 3­MBT, which is similar to skunk's defense spray [2]. Not quite what you’d be expecting when you take a swig of a chilled beer.

With some good reasons to package beer in cans, it comes as no surprise their popularity is on the increase again, especially among craft brewers, who build a business around their taste credentials, so want to preserve it in the best way possible, while keeping costs down.

Since 2005, the US market share of beer packaged in cans has risen from 48.1% to 54.7%, while the share of bottles has decreased from 41.8% to 35.1%. It will be interesting to see if this trend is echoed in Europe, where there is still a strong preference for bottles, and shorter distances to ship the product.

Whatever the latest trend, it looks like the can versus bottle debate is set to continue for years to come. 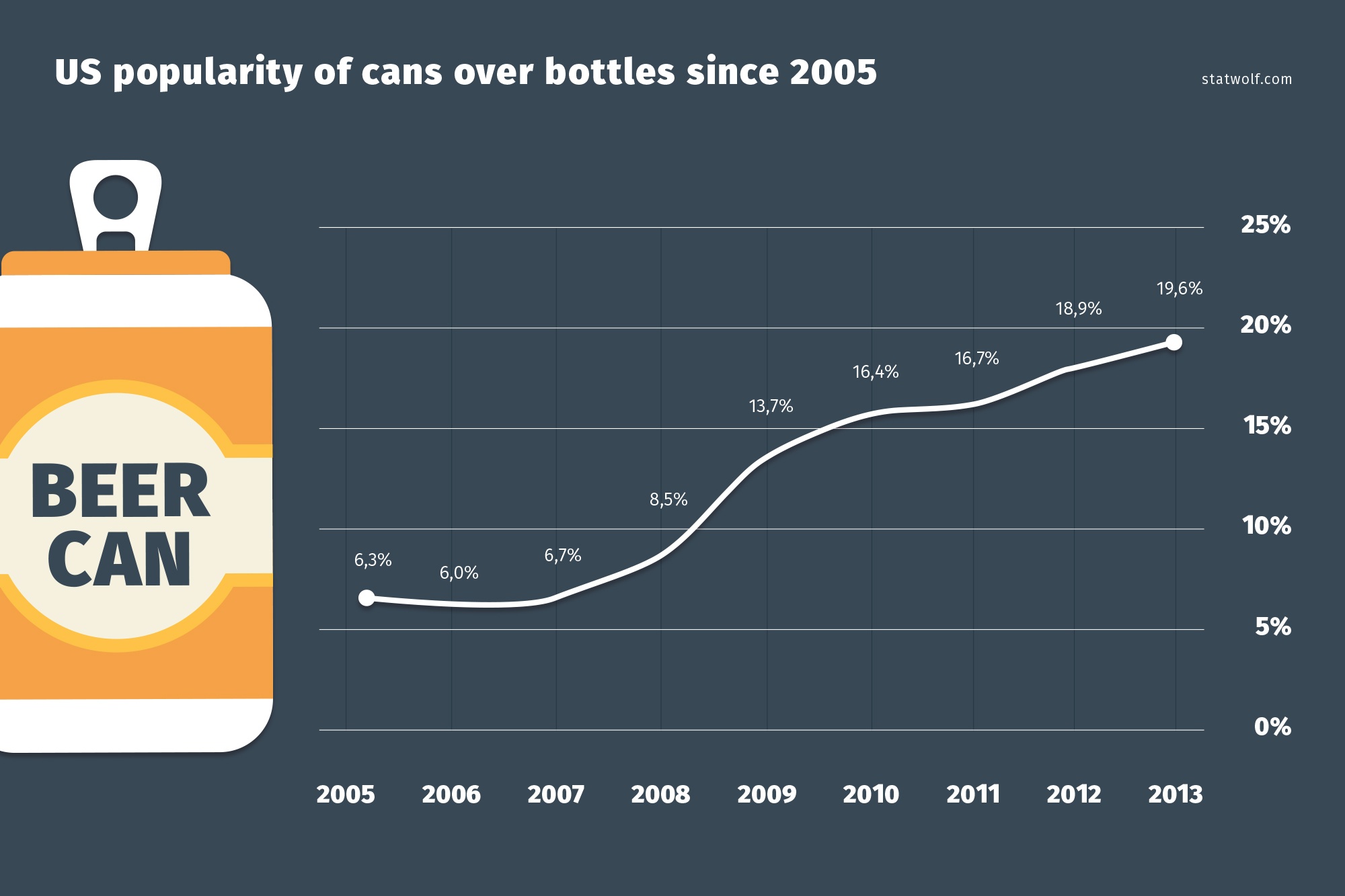 [1] The Atlantic: The Rise of the Beer Can [2] BeerSci: Why You Should never drink Beer from a clear glass bottle